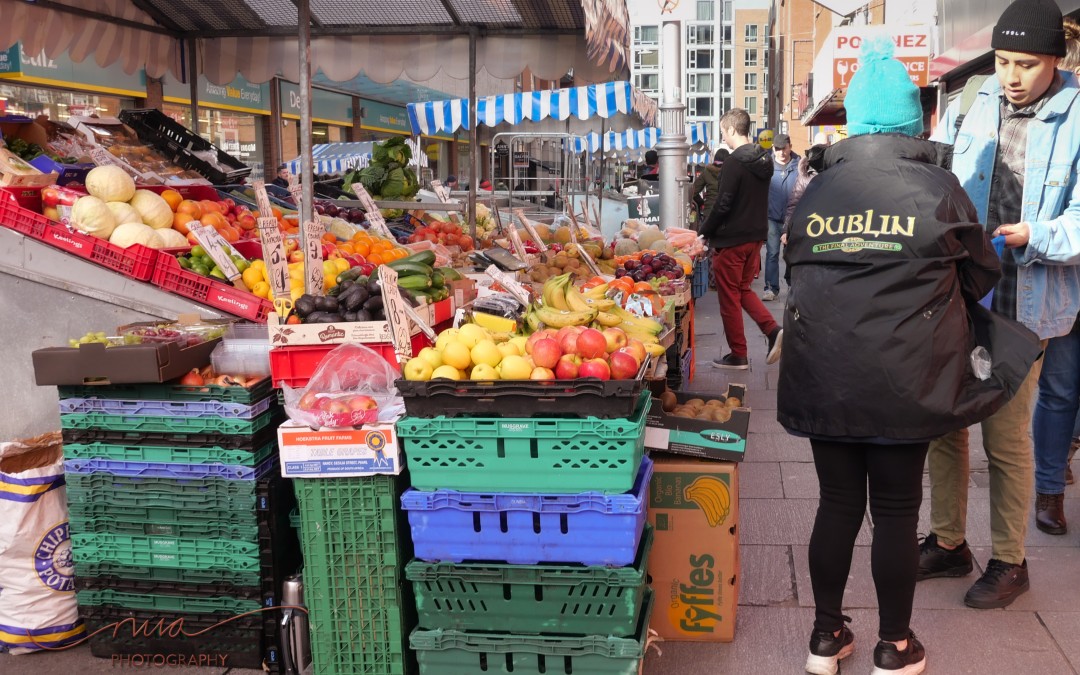 Moore Street, Dublin is a city street full of character and history on the Northside of the Liffey in the Henry Street area shopping district.  It is great Ireland’s capital, Dublin, still has an 18th century market trading on a daily basis, alongside, all the modern department stores. The recent history of Moore Street market has been a mixed one, and seems to be at yet another crossroads. Many stalls on Moore street are not in daily use and some of the old regulars seemed to have disappeared,  currently around 15 traders still hold licences to trade. The influx of new communities from abroad with a traditions of market shopping for fresh produce became a lifeline in recent years to the market. However fresh vegetables and fruit are on constant cheap deals in the local supermarkets, and so Moore Street is again struggling.

Development plans for one side of Moore street, and the closing of the wholesale fruit, flowers and vegetable market up near Smithfield, seems like another nail in the coffin for the Moore Street market. In a world where so much retail streets have lost character and become identical the world over, the loss of Moore street would be a kin to loosing a little of our city’s soul. We will never get back the street character and characters if it is lost or if it is totally replaced for a tourist market. Many traders are families with a long history of street trading and no doubt have a legacy of local social history passed down from generation to generation. Part of a living city we really should be cherishing.

Our unique heritage and most definitely our city’s traditional street traders community are desperate for a new life line to reignite the interest in Moore street. The need for proper facilities for traders and shoppers, with proper community policing and the opening up of casual trading pitches for local inner city food producers for example could become an incredible asset to the north inner city, selling alongside traditional stalls. Rejuvenating the way we live and shop in our city makes for a richer place for us all and keeps the small trader in the heart of the city.

Hopefully Moore Street finds its champion soon. We love to shoot all areas of the city and it’s people, capturing the Dub characters and streetscapes. Hopefully funds will go into it’s rejuvenation in the near future.

We have captured a little of it’s character and will hopefully get a chance to see it’s rejuvenation in the near future. Find some more photographs here